Junior volleyball player Becca Lowden has been recognized as “Defender of the Week,” six times since the beginning of the Fall 2017 semester.

Lowden’s position on the team is the Libero. For a nonathletic person, Lowden describes her position as, “the player in the different color jersey.”

She only plays back row, always behind ten foot line. When playing she mostly passes, digs, serves, and subs for the middles. The Libero is in and out of the game constantly, making it one of the most challenging positions.

Ever since Lowden started playing volleyball in eight grade, she has been dedicated to the game. She has such a drive to work hard while on the court.

“It’s not in my personality to not work hard… even if it’s something I don’t like doing… I still work hard,” Lowden said.

Lowden is one of the three team captains. She leads the team with encouragement and understanding.

“You have to be a steady player, like emotionally you can’t be to high or low,” Lowden said.

Not only is she a steady rock for the team, but she also leads by example. Her work ethic and determination to grow as a player is projected onto her teammates.

“She constantly gives her all every time she touches the court and truly pushes her teammates to be better everyday,” Johnson said.

She is a great teammate, with lots of energy and passion on the court and her teammates love that about her.

Junior Savannah Evans said, “Becca is extremely consistent on the court and one of the most reliable players on the team. She is very level headed and fun to play next to.” 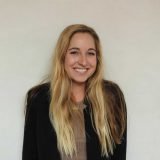 Kendall is a senior English major. She hopes to teach junior high english in the future, while still publishing some of her personal work. She enjoys, reading good books on the beach, blogging, and sipping on vanilla lattes.